Children walk around the building and the surroundings and take pictures of the regular geometrical shapes that they see in their day-to-day life (Windows, traffic signals, etc…).
If the activity is implemented in Scratch, these pictures are sent to a mail account in the class computer.  Every team builds a program with Scratch where one of the images previously taken is used as background. In the program a character (sprite) has to draw the contour of the geometrical shape appearing in the Picture.
If the activity is implemented with Mindstorms the shapes to follow by the robot are drawn and marked with coloured tape in a large cardboard.

–    Previous to the start of the workshop be sure to have all the material, connection to internet, and that every computer has a mail account to receive the pictures.
–    Evaluate where can children walk to take pictures and how many adults are needed to walk with them.
–    At the start of the workshop tell students the what are they going to do, the different parts of the workshops and if necessary make some reflections and examples about regular shapes, angles (inner and outer), etc..
–    Form the teams.
–    Go to take pictures.
–    If implemented with scratch:
Once in the room again, send the pictures from the tablet to the computers.
Start programming activity
When the programs are done visualize them all together (recommended with a projector).
Talk about the differences between the different shapes appearing in the different programs, the discoveries made, problems arisen, learnings, team work, etc..
–    If implemented with Mindstorms:
Students have to draw and cover with coloured tape the pictured shapes in large cardboards (robots will be programmed to follow the drawn path)
Start the programming activity and the tests with the robots.
When all the robots are programmed visualize the path every one of them follows.
Talk about the differences between the different shapes followed by the robots, the discoveries made, problems arised, learnings, team work, etc.. 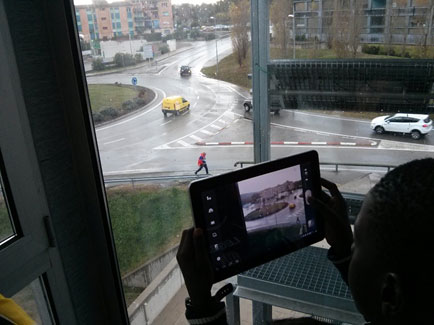 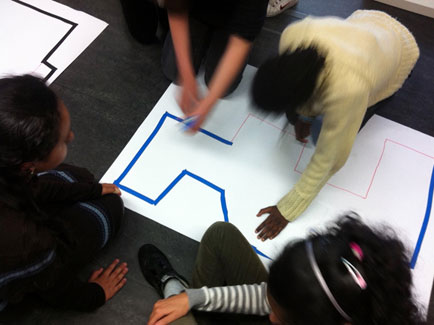 Fig. 2. Students analyzing the geometrical characteristics of a path 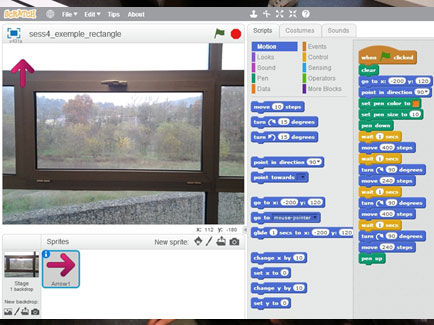 Fig 3. The sprite arrow is programmed and ready to draw the rectangle shape of the window. 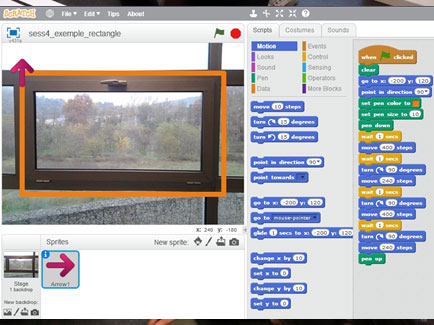 Fig 4. The sprite arrow has followed the shape of the window with success with many trials 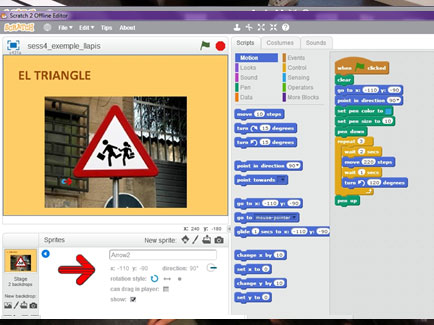 Fig 3. The sprite arrow is programmed and ready to draw the triangle shape of the traffic signal.

Fig 4. The sprite arrow has followed the shape of the traffic signal with success after many trials