Moving a robot around with LEGO Mindstorms

Building the robot from small lego pieces.
Programming the robot to trace geometrical shapes which were previously drawn on large sheets of cardboard.

Step 1:  The students were organized into six small groups of two children each. Each group built a certain part of the robot (arms, legs, body, head) and another group put all its parts together.

Step 2:   The students drew three geometrical shapes (rectangular, triangle, circle) on three large sheets of paper. Then they placed their drawings and stuck them onto the floor.

Step 4: At first they had created a new program and named it. Each team named the same program differently. 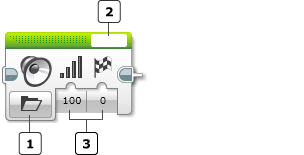 1 Mode Selector We selected the sound we wanted

3 Inputs- They chose a maximum percentage of volume 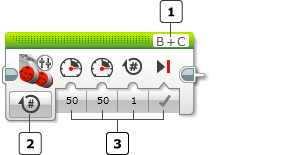 They used the Move Steering Block which was connected to the B and C motor which is the tracks of the robot. ( on the Steering Block They can choose the direction by changing the steering perimeter, they can choose the power and also the duration-how long it should drive).
The power of the tracks was set to maximum speed 100, straight ahead, to the left 100.
The power of the tracks was set to the right to maximum speed 100 „Power Right”.
The duration was set to five seconds.
The tracks had to stop when the movement was finished, „Brake at End”: True
So this block carried out the command to move straight ahead, at full speed for five seconds.

Step 5:  Move steering – On For Degrees

You can control the speed and direction of your robot using the Power and Steering inputs. Use Brake at End to stop your robot after exactly the specified number of degrees.

The block „Steering Move” from „Action” was set to perform the following command: the robot had to turn to right with an angle of 90 degrees.
After adding this block the robot steers 90 degrees and goes on the  the width of the rectangle. By  adding this block more than one time the robot will follow the route of the rectangle.
The steering wheel had to stop when the movement was finished:  „Brake at End”: True

Step 6: After they have carried out this program the students transferred it with a USB cable in a robot.

Expand/ Collapse
DOWNLOADING A PROGRAM – PROGRAMMING MODE
When your program is ready, you can download it to your EV3 Brick.

Ensure that the EV3 Brick is switched on and connected to the computer. The connection can be via a USB Cable, Bluetooth, or Wi-Fi. See Connecting to your EV3 Brick.

System requirements Apple Macintosh with OS X
•    Mac OS 10.6, 10.7 and 10.8 with the latest Service packs
•    Dual core processor 2.0 GHz or better
•    2GB of RAM or more
•    2GB of available hard-disk space
•    XGA display (1024 x 768)
•    1 available USB port
•    Once you have confirmed that your computer meets the minimum system requirements, you are ready to install the software. Close all other programs, then double click on the installation file in the EV3 Software application folder. Installation will now begin. 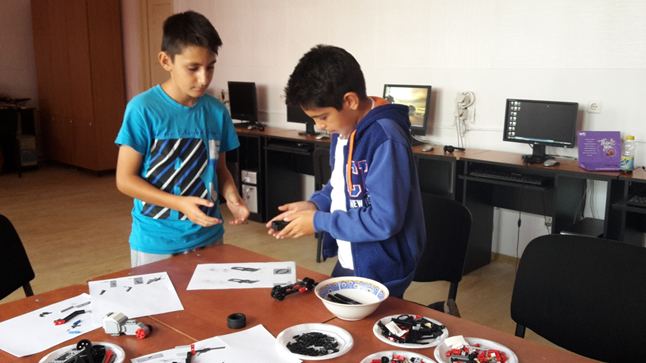 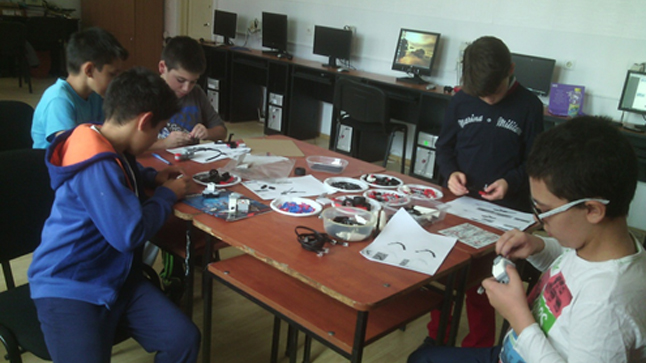 They were studying the pictures that came with the robot and working at building it. 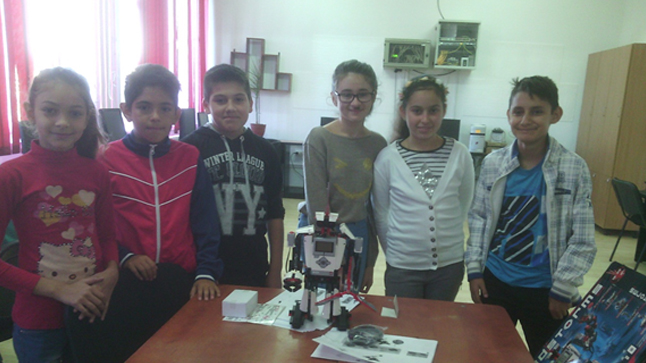 This is the robot after they have assembled all the parts each team has build. 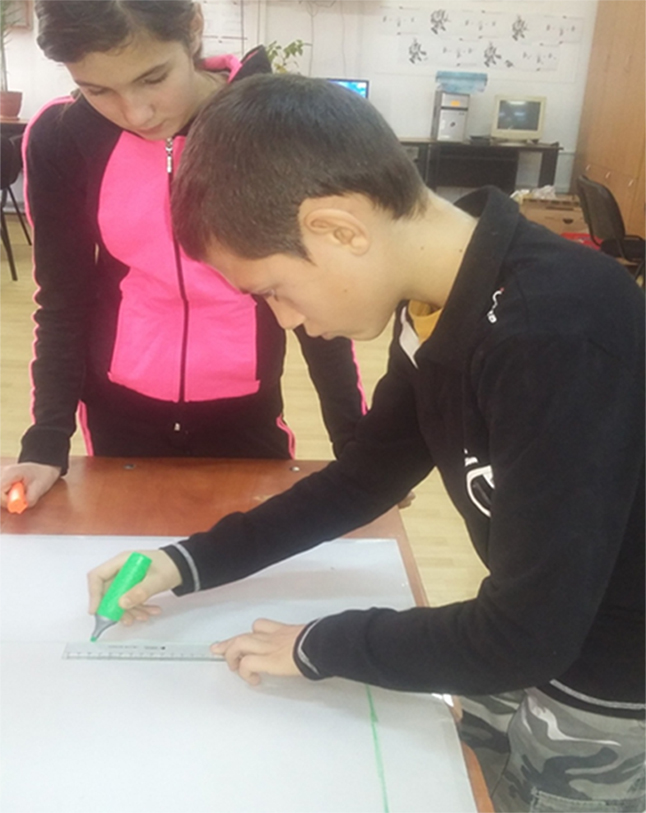 1.    Add the sound and make the robot say something. 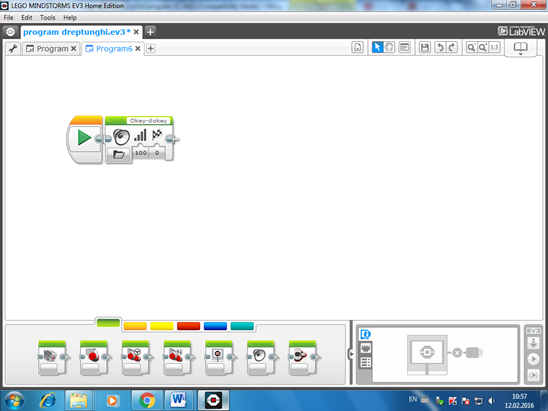 2.  Add the block “Move Tank” and make the robot move straight ahead at full speed for five minutes, then stop and take the command of the other block and follow the length of the rectangle. 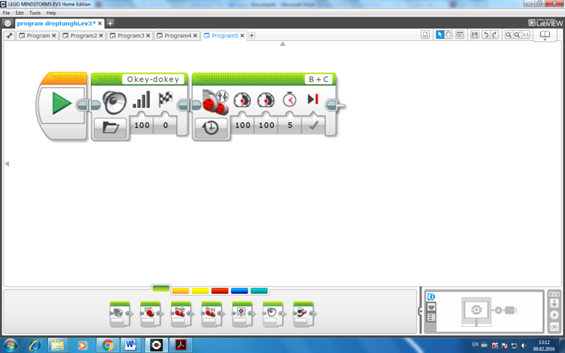 3.    Add the third block and make the robot steer 90 degrees and also trace the width of the rectangle. 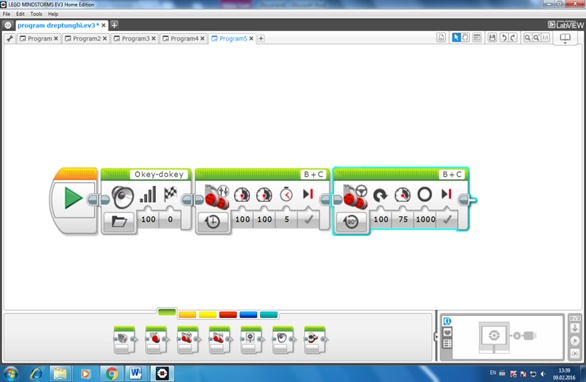 4.    Add the same blocks and the robot will follow the path of a rectangle. 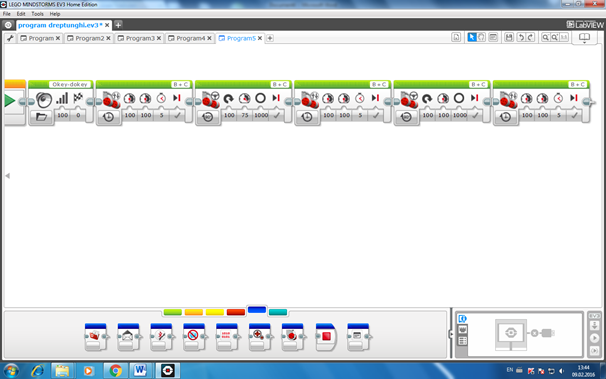 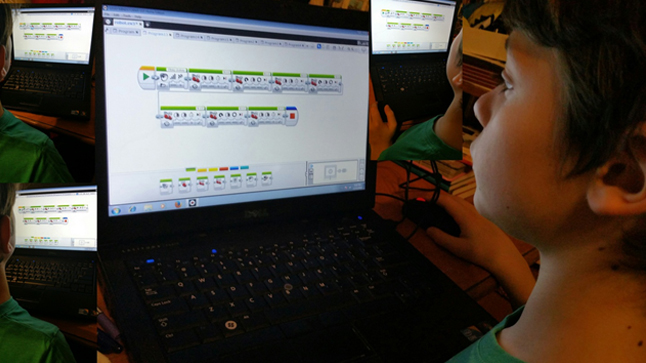 6.    Transfer the program from your PC to the robot by using USB cable

The robot is moving. 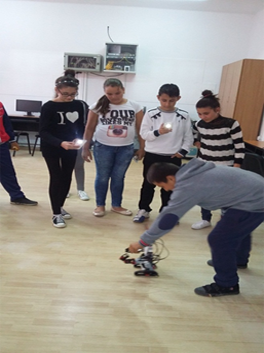