Moving a robot around with POB robots

This activity has to be carried out in two steps: (i) POB robot and Risbee software have to be introduced to teach the basis of the programming concept, and (ii) a challenge can be organised as presented in the section E.
It can be noted that the activities can also be carried out without the POB robot by using the simulation environment of Risbee as presented in the appendix.

•    1st step (duration – one day) – the challenge proposed to the participants is the following: “Are you able to program a robot in order to build a station on Mars.” In that activity, the robot should draw on the floor the plans of a space station and the children have never used the robot previously. At the end of the day, each team tests their approach. There is a maximum of 5 team composed of 6 children. The challenge is centred on programming the robot. However, in order to win, the teams must performed extra activities in parallel such as: create advert poster and radio spot to rise money for the project, propose solutions to produce water or energy, etc.
•    2nd step (duration – one month) – based on the previous challenge, open-discussions between children and their guidance councillor in the college. The goal is to understand why the children are interested or not by science. The second goal is to convince children that they are able to work and be creative in the future in a scientific domain even if they do not like mathematics!
•    3rd step (duration – one morning) – feedbacks with open-discussion about previous steps. Are the children are interested in science, programming, technology? What are the reasons? Extra presentations by engineers, scientists, etc.. of their activities. (one morning) 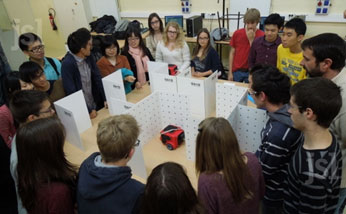 A booklet with the different activities is available at the following web address:
https://github.com/glemaitre/early-mastery/blob/master/technovision/guideline-activities/english-latex-guideline/report.pdf