The idea is that the children (divided into teams) design and program a collaborative animation by using Scratch. Each team programs one part of the global story in their own computer, then they synchronize the parts, and at the end of the activity all the computers are put together in a line and the students can watch the full story where the characters move, speak and jump from one computer to the next.

1.- The teacher should tell the students that they all together will design an program an animation story where the characters jump from one computer to the next. If possible it’s great to have a demo (a story involving just 2 or 3 computers) to show the children the final effect. [10 minutes]

2.- The class decide the topic or the main storyline of the story. Brainstorming activities and a blackboard are very helpful at this stage. Teachers can talk about storyboards and show examples. [20 minutes]

3.- The class is divided in teams (3-4 students/team). Each team has one number representing their position within the story. [5 minutes]

5.- Now it’s time to go to the computers. The teams open Scratch and they start creating the background and their characters. They can use the paint editor of Scratch, or any other editor, or even they can search for images on the Internet (It depends on the weight given to the artistic dimension of the activity). [30 minutes]

7.- The teams use Scratch to program their parts of the story. It means that they program the characters (Scratch sprites) to move, speak and perform the required actions. This is the part of the activity that involves coding. If they are advanced users of Scratch and they have some free time, then they can even record their own voices for the dialogues. [45 minutes]

8.- After programming, the transitions from one computer to the other should be synchronized. There are different ways to do it, but the easiest way is to use the “wait X seconds” block of the Scratch control menu. For example, if Team 1’s story lasts for 23 seconds, then Team 2 should use a “wait 23 seconds” block at the beginning of their scripts, this way their sprites will start appearing, moving and speaking at the right time. And so on for the other transitions. [15 minutes]

9.- Finally we move the computers and we put them in a line, this way we can all watch the final animation with the chained stories. We repeat the final effect several times and we adjust timings if necessary. [10 minutes] 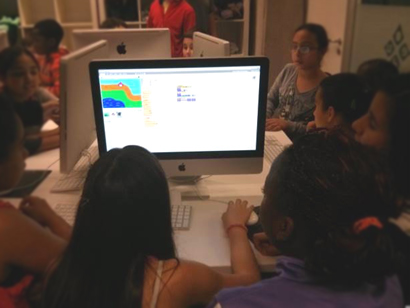 A team programming their part of the story. 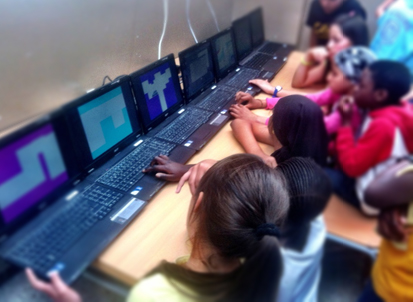 The teams synchronize their animations. 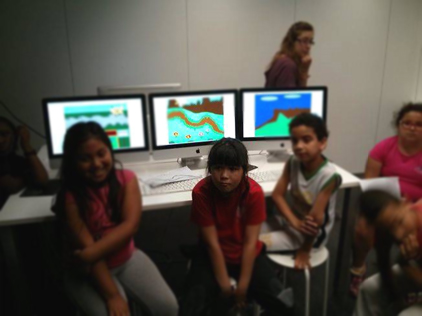 The whole class watches the final effect with the computers put together. 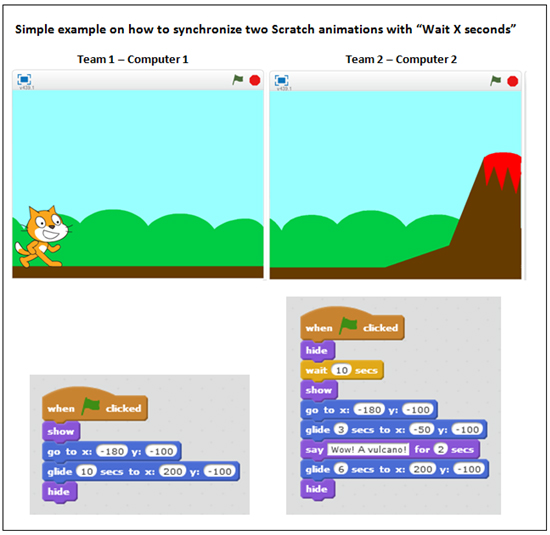 Example on how to synchronize two Scratch animations